Maker, Paul Hletko, founder and master distiller at Few Spirits, based in Evanston, Illinois dished with Maureen Petrosky, while sipping some whiskey in Louisville, KY.  She discovered he makes really good stuff and had me track him down so you could get to know the man behind the booze. Here’s what Paul had to share…

What’s your story? How’d you get into the booze business?

PH: I’ve enjoyed creating new things for almost as long as I can remember. I’ve played music, cooked, made  beer, bacon, cheese, sausage, you name it.  I’ve had particular fondness for music and alcohol.  They do go rather well together.  I do have some family history in the beer business, but it disappeared, and when my grandfather died, I wanted to build on his family history but do so in a positive fashion.  Prior to WWII his family owned a major brewery in what is now the Czech Republic.  After the Nazis invaded, they no longer owned it, and his entire family was wiped out in the camps.  After the war, he was never able to secure ownership again, and after he died, I felt drawn to rebuild legacy.

What about whiskey/gin really gets you going?

PH: I love the character and flavor.  There is so much art in the creation of distilled spirits, and that gets me really excited.

Do you think making spirits was your calling?

PH: I’m starting to think so.  I’ve never done anything that I’ve found nearly as fulfilling or rewarding personally.  Financially, yeah, that’s a different story.  But I get to create and build and make something that’s new!

Anything new from you that we should be on the look out for?

PH: We’re always trying to create new spirits, and often release small batch releases – even as low as like 30-40 bottles.

Do you have a favorite in your portfolio?

PH: I do, but it tends to change every day!  Rather like asking which of my children I love the most – and each is convinced its them.

PH: The one in front of me, made with Few!

Advice for a budding distiller?

PH: I’d really ask why.  There are an awful lot of people that find it glamorous or  a get-rich quick scheme, and it is neither.  I just wish I had a nickel for   everyone that tells me they  really want to distill gin “because I like to drink gin” or make whiskey “because I just love Jim Beam.”

What makes a great spirit?

PH:A great spirit goes somewhere that other spirits do not – there’s a uniqueness and an expression of the distillers taste.  One of the frustrating things about the spirits business is the sheer quality of most of the spirit out there – the “big boys” make some amazing products.  But, there’s so much room to make unique spirits that are an artistic expression of the distiller, that its just really exciting to experience the vision.

What’s your favorite drink to make?

PH: I’m currently obsessing over negronis with our Barrel Gin…

PH: The dream?  Make something new that is true to who we are as a team.  I’m surrounded by an amazing team of people, all working together to create something that has never existed, and build something we can all be proud of.

Why do you call it Few Spirits?

PH: We don’t make a lot, just a Few!  Making a good drink requires Few ingredients!  If you’re having one drink, you can make it a Few!  It would be sheer coincidence that a rather famous resident of our town was Frances Willard.  You can google her middle name…

Any deep dark secrets we should know about you or Few Spirits?

PH: One time, we listened to Air Supply while making bourbon whiskey.  We do feel shame, but it felt like the right thing to do.

Feel like having a few? Check them at  fewspirits.com 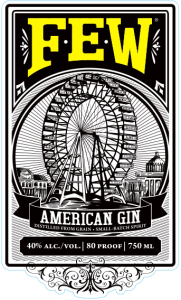